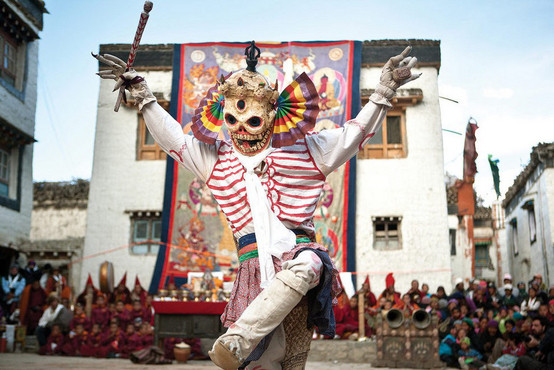 Tibetan festivals have been deeply influenced by Buddhism. They either have strong religious aroma, or they are completely religious. Throughout history, under the harsh natural environment and hard working conditions, the people living on the snowy land yearned for a better life through their own efforts, with the God’s mercy and with the Buddha’s protection. It is the festivals that offer opportunities for them to express their prayer to deities, Buddha and Nature, during which they amuse the Gods, and themselves as well.

There are a lot of festivals in Tibet. On the Tibetan lunar calendar, festivals appear in almost every month. And some festivals also attract the faithful as well as curious onlookers. Dancing monks can be seen in the Year End Festival (February-March) held to dispel the evil of the old year and auspiciously usher in the new one; Losar (New Year Festival) is a colorful week of activities (February-March), including Tibetan drama, pilgrims making incense offerings and Tibetans dressed in their finest crowding the streets; charm dancing and chang drinking are the order of the day at the Tsurphu Festival (May-June) - the highlight is the dance of the Karmapa.

Noticeably, though with more identification than variation or distinction, the 100 odd festivals mentioned above are not necessarily all celebrated in each place. It is the variation and the distinction that makes the festivals splendid.

It is the greatest festival in Tibet. In ancient times when the peach tree was in blossom, it was considered as the starting of a new year. Since the systematization of the Tibetan calendar in 1027 AD., the first day of the first month became fixed as the New Year. On the New Year's Day, families unite "auspicious dipper" is offered and the auspicious words "Tashi Delek" are greeted. Learn more about Tibetan New Year.

It's held on the 15th of the first lunar month. Huge yak-butter sculptures are placed around Lhasa's Barkhor circuit.

Saga Dawa Festival (May or June)

It is the holiest in Tibet, there memorable occasions coincide on this day, Buddha's birth and Buddha's enlightenment. Almost every person within Lhasa joins in circumambulations round the city and spends their late afternoon on picnic at "Dzongyab Lukhang" park at the foot of Potala. Learn more about Saga Dawa Festival in Tibet.

Horse race and archery are generally popular in Tibet, and Gyantse enjoys prestige of being the earliest in history by starting in 1408. Contests in early times included horse race, archery, and shooting on gallop followed by a few days' entertainment or picnicking. Presently, ball games, track and field events, folk songs and dances, barter trade are in addition to the above.

There are many horse racing festivals in Tibet, the one in Nagqu of Northern Tibet is the greatest. August is the golden season on Northern Tibet's vast grassland. Herdsmen, on their horsebacks, in colorful dresses, carrying tents and local products, pour into Nagqu. Soon they form a city of tents. Various exciting programs are held, such as horse racing, yak racing, archery, horsemanship and commodity fair.

It is one of the major festivals in Tibet, also known as the Tibetan Opera Festival. The founder of the Gelugpa (Yellow Sect of Buddhism), Tsongkhapa set the rule that Buddhists can cultivate themselves only indoor in summer, to avoid killing other creatures carelessly. This rule must be carried out till the seventh lunar month. Then Buddhists go outdoors, accept yoghurt served by local people, and have fun. Since the middle of 17th century, the Fifth Dalai Lama added opera performance to this festival. Famous Tibetan opera troupes perform in Norbulingka (Dalai Lama's summer palace). Learn more about Shoton Festival in Tibet.

It is believed when the sacred planet Venus appears in the sky; the water in the river becomes purest and cures diseases. During its appearance for one week, usually the end of the seventh and beginning of the eighth lunar months, all the people in Tibet go into the river to wash away the grime of the previous year.

Long time ago, when Tibet was in danger of large scale invasion, the Kongpo people sent out an army to defend their homeland. It was in September and the soldiers worried that they might miss the New Year, highland barley wine and other good things. So people had the Tibetan New Year on 1st October ahead of time. To memorize those brave soldiers Kongpo people present three sacrifices and stay up at night from then on. And now it has become the Kongpo Festival for entertainment like Kongpo dancing, horse race, archery and shooting.

The farmers in Lhasa, Gyantse and Shangnan to celebrating their bumer harvest in this time. During that time, people enjoy with horse racing games, costume fashion show, songs and dance Archery and picnic etc.

Related articles
Tibetan Arts This page tells about some typical Tibetan art and culture.
The People of Tibet This page tells about Tibetan people’s characteristics, tradition, religious believes, ways of living, and etc.
Ethnic Religions Learn more about Tibetan religion and culture before traveling to Tibet.
Lhasa Heritage Hotels We list some Tibetan traditional hotel recommendations for your consideration.
Tibetan Nomads Tibetan people are an ancient nomadic nationality, having long lived a nomadic life in their history. Therefore, nomadic culture has also played an important role in Tibetan traditional cultures.
Three Major Dialects in Tibet The Tibetan language in general can be divided into three dialects including the U-Tsang dialect, Kham dialect and Amdo dialect in all. The so-called Kham Tibetans, Amdo Tibetans and U-Tsang Tibetans are divided according to the three major dialects.