The People of Tibet 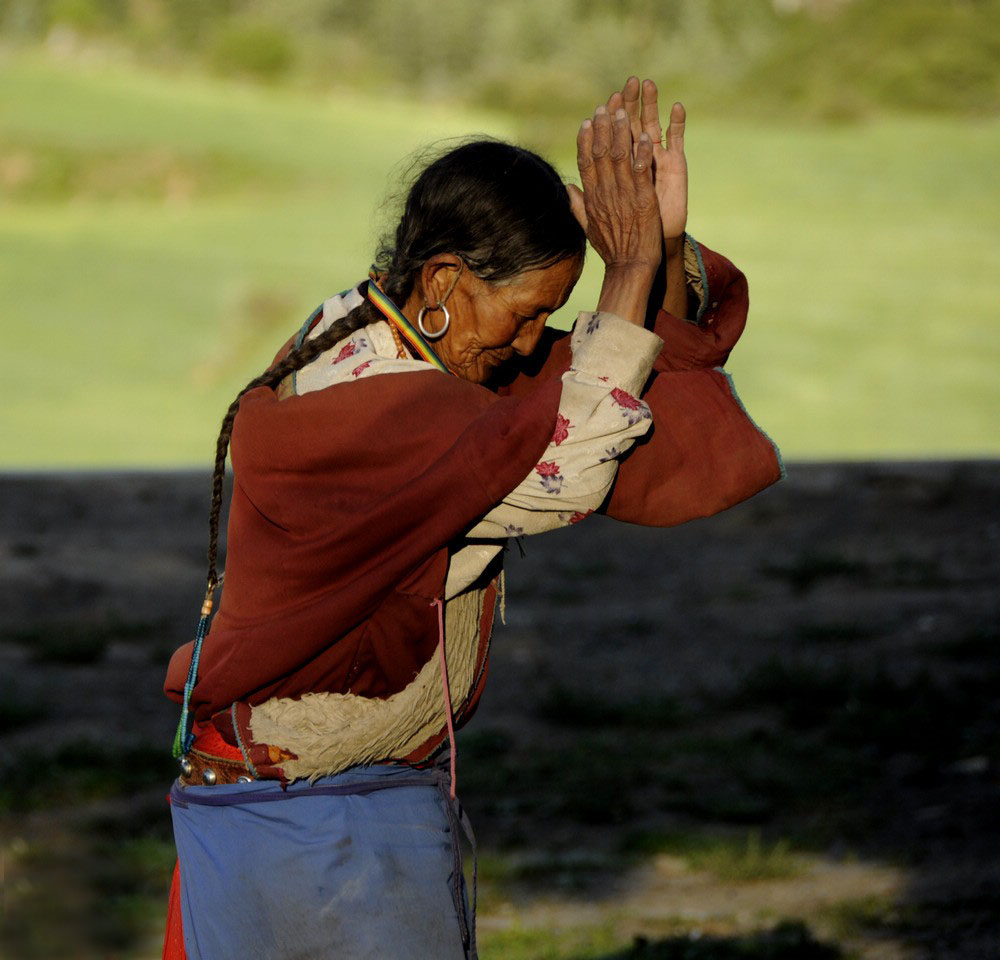 Tibetans are the descendants of a number of nomadic peoples who apparently migrated southward and westward from the Central Asian steppes and the Chinese borderlands before settling down to cultivate the fertile Tsangpo Valley. In terms of language, script, food, temperament and above all religion, they are poles apart from their Han Chinese neighbours. They have a unique identity that mixes influences from their Himalayan neighbours, extreme mountain environment and war-like past. While the Chinese drink their tea green, Tibetans take theirs with yak butter; when the rest of China eats rice, Tibetans eat tsampa (roasted barley); even when getting drunk Tibetans drink barley beer instead of Chinese rice wine.

Tibetans are such a deeply religious people that a basic knowledge of Buddhism is essential in understanding their world view. Settled agriculture permitted the development of the extraordinarily rich Buddhist civilization, channeling much of the Tibetans’ martial ferocity into religious zeal. Buddhism permeates most facets of Tibetan life and shapes aspirations in ways that are often quite alien to the western frame of mind.

The ideas of accumulating merit, of sending sons to be monks, of undertaking pilgrimages, and of devotion to the sanctity and power of natural places are all elements of the unique fusion between Buddhism and the older shamanistic Bon faith.

About a quarter of Tibet’s population continues to pursue a nomadic lifestyle, while the farming majority still exhibits remarkable mobility for an agrarian society. The nomadic life was always considered more prestigious than that of the farmer. The main reason for the attitude is that those working the land were not usually free to move around, since tax obligation compelled them to remain and farm their hereditary plots.

For travelers, the easy smile of most Tibetans is infectious and it is rare for major cultural differences to get in the way of communication. Tibetans are among the loveliest people in Asia and every easy to get along with: open joyful, sincere, tolerant and good-humoured. This combination is all the more remarkable in view of the anger and long-harboured resentment that must lie just under the surface in Tibet.

Marriage between members of different ranks was unusual and generally prohibited. In a few regions it was customary for priests and nobles, or for priests and commoners, to intermarry, but intermarriage with outcastes was far more unusual; this remains the case up to the present day.

In case you are wondering why your Tibetan guide can run up the side of a 4500m hill with ease, while you collapse gasping in the in air after less than one minute, recent DNA research has shown that the Tibetan people are genetically adapted to living at high altitudes. In fact that 3000 years it took Tibetans to change their genes is considered the fastest genetic change ever observed in humans. You never stood a chance.

Traditionally there have been at least three distinct segments of Tibetan society: the drokpa (Tibetan nomads); rongpa (farmers of Tibetan valleys); and sangha (communities and nuns). All lead very different lives but share a deep faith in Buddhism.

These communities have also shared a remarkable resistance to change. Until the early 20th century Tibet was a land in which virtually the only use for wheel was as a device for activating mantras. Tibet has changed more in the past 50 years than in the previous 500, although many traditional social structures have endured Chinese attempts at iconoclasm.

As in most society, there is some generational divide among Tibetans. The younger generation (in Lhasa and the main towns at least) is as enamoured with pop music, karaoke, mobile phones and the internet as most young people around the world and most know little about “old” Tibet, having often grown up in a Chinese-language environment. That said, young Tibetans still have a remarkably strong sense of Tibetan identity and you’ll still see many young Tibetans visiting monasteries, wearing traditional dress and making pilgrimages to holy sites.

Related articles
Tibetan Festivals This page introduces some most important Tibetan festivals such as Tibetan New Year, Butter Lamp, Saga Dawa, Shoton festivals and celebration date contrast.
Tibetan Arts This page tells about some typical Tibetan art and culture.
Ethnic Religions Learn more about Tibetan religion and culture before traveling to Tibet.
Lhasa Heritage Hotels We list some Tibetan traditional hotel recommendations for your consideration.
Tibetan Nomads Tibetan people are an ancient nomadic nationality, having long lived a nomadic life in their history. Therefore, nomadic culture has also played an important role in Tibetan traditional cultures.
Three Major Dialects in Tibet The Tibetan language in general can be divided into three dialects including the U-Tsang dialect, Kham dialect and Amdo dialect in all. The so-called Kham Tibetans, Amdo Tibetans and U-Tsang Tibetans are divided according to the three major dialects.