Tibetan religion is composed mainly of three parts: Tibetan Buddhism, Bon Religion and folk religion. In geographical distribution, they exert different influences on Tibet in different areas. In religion taxology, they first two belong to theological religion while the folk religion lacks systematic theory, special activity venue and professional religious group. In mutual relations, the Tibetan Buddhism and Bon Religion on one hand repel each other, but on the other hand, they influence, infiltrate and co-exist with each other. Therefore, we see Bon Religion in Tibetan Buddhism and vice versa. Also, both of them absorbed many contents from folk religion (for instance, the worship for certain gods). In addition, Tibet has Islam and Catholicism, with few followers and little influence. 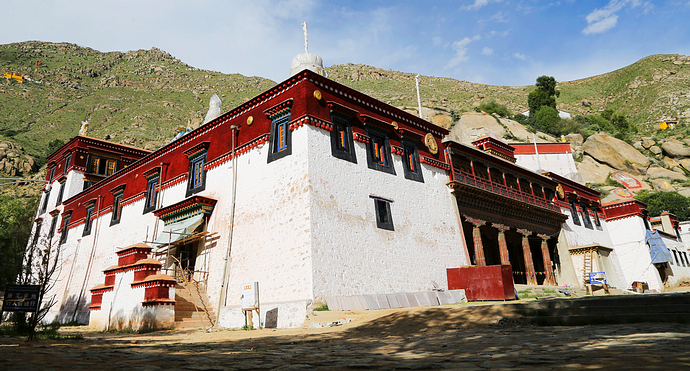 Buddhism entered Tibet in the 7th century from China’s central plain and India and Nepal. Since then, it had been engaged in prolonged and intense fight with the Bon Religion, which formerly ruled Tibet. For hundreds of years, in its self-development under the need to suit the local environment and strive for more followers, Buddhism adsorbed a great deal of contents and forms of the Bon Religion as well as other kinds of folk religions. Also affected by multiple cultural factors of surrounding areas, the Buddhism in Tibet got its own characteristics. It developed voluminous Tibetan scriptures, detailed scripture explanation and doctrine including both exotericism and esotericism while focusing on the latter and formed various sects, complete organizational structure, strict rules of learning scripture and practicing and unique reincarnation system of Living Buddha. Therefore, it became a new branch in Buddhism that is different from Han and Pali (or Southern) Buddhism. It is called Tibetan Buddhism, also known as Lamaism.

The formation and development of Tibetan Buddhism exerted a protracted, wide and profound influence on the traditional society and culture of Tibet.

Throughout its development, Tibetan Buddhism formed many sects with their own branches. Several sects once played important roles on the political stage of Tibet and even entire China in history. As time goes by, several major sects are left today, represented by the Nyingma Sect (or Red Sect), Sagya Sect (or Striped Sect), Gagyu Sect (White Sect) and Gelug Sect (Yellow Sect). Although the Gelug Sect took shape relatively late, it grew fast and became a mainstream in Tibetan Buddhism since the Qing Dynasty. The Dalai Lama and the Panchen Lama are the most important reincarnation Living Buddhas in the Gelug Sect.

The Tibetan Buddhism is spread mainly in Tibet, Tibetan areas of Qinghai, Gansu, Sichuan and Yunnan provinces and areas where Mongolian, Tu, Yugur and Monha ethnic groups live in compact. There are also some followers among the Naxi, Lhoba, Pumi and Han ethnic groups. In addition, the Tibetan Buddhism also influences such counties as Sikkim, Bhutan, Nepal and Mongolia and the Buryat area Russia. 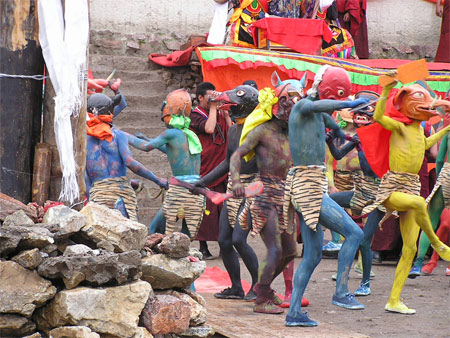 The Bon Religion, also known as Bon-po Religion, is an ancient religion in Tibet. It was created by Tonpa Shenrab Miwoche, prince of ancient Zhangzhung state, on the basis of primitive religion. In early stage, it mainly included such rituals as praying for good luck and driving away disasters and ghosts. Later the Bon Religion was spread eastward to the Yarlung Zangbo River valley and expanded its influence in the slave society of the Tubo Kingdom. In the reign of the 8th Tsampo, the Bon Religion was exiled. Historians about the Bon Religion called this “former prospering period.” After the Buddhism was introduced into Tibet, the Bon had been engaged in a protract struggle against it. In fact, it was a war among different interest groups. By the time of Trison Detsan’s rule, the Bon Religion was again given a heavy blow, which led to its demoralization of about 100 years later. This period is known as the “middle prospering period.” From then on is the “later prospering period” of the Bon Religion. Between the 9th and 10th centuries, a great deal of Bon classics were found accidentally in Sam-yas Monastery, preceding the revitalization of the Bon Religion. These documents are called “Fuzang” and divided into five categories according to their sources. The scriptures enriched the Bon Religion in theory, but were greatly influenced by Tibetan Buddhism. At the same time, to promote its survival and self-development, the Bon Religion absorbed not only contents but also forms of Buddhism and Tibetan Buddhism. Many rituals in Buddhism can be found in the Bon Religion, but in totally different terms and with different meaning. For example, the Bon followers also wear kasaya, build temples and worship Buddha, but their Bddha is Tonpa Shenrab. They also follow prayer wheels, circle Mani and twist beads but all in an opposite direction with Buddhism. They chant “six-word incantations,” but with different contents. They even follow the reincarnation system of Living Buddhas.

Related articles
Tibetan Festivals This page introduces some most important Tibetan festivals such as Tibetan New Year, Butter Lamp, Saga Dawa, Shoton festivals and celebration date contrast.
Tibetan Arts This page tells about some typical Tibetan art and culture.
The People of Tibet This page tells about Tibetan people’s characteristics, tradition, religious believes, ways of living, and etc.
Lhasa Heritage Hotels We list some Tibetan traditional hotel recommendations for your consideration.
Tibetan Nomads Tibetan people are an ancient nomadic nationality, having long lived a nomadic life in their history. Therefore, nomadic culture has also played an important role in Tibetan traditional cultures.
Three Major Dialects in Tibet The Tibetan language in general can be divided into three dialects including the U-Tsang dialect, Kham dialect and Amdo dialect in all. The so-called Kham Tibetans, Amdo Tibetans and U-Tsang Tibetans are divided according to the three major dialects.