On the old road between Lhasa and Gyantse, the dazzling Yamdrok Lake (aslo spelled as Yamdrok-tso) can be seen from the summit of the Kamba-la pass (4700m). From Gyantse, you can see one arm, and follow it until it disappears around a bend in the shore which makes it difficult to estimate the size of the lake.

Yamdrok Lake means "the jade lake on the pasture", which is one of the four sacred lakes in Tibet (the others are Lhamo La-tso Lake, Namtso Lake and Manasarovar Lake). According to folklore, the lake was transformed from a fairy goddess in heaven, and is said to be the female Guardian of Buddhism in Tibet. People here believe that it will bless and protect them.

The lake surface is 4441 meters above sea level, the distance from east and the west is 130 kilometers, the north and south is 70 kilometers. The depth of the lake is 20-60 meters. As the biggest habitat of water birds in southern Tibet, birds migrate here during winters, there are swans, water pigeons, and yellow ducks, ospreys and Bar-headed Goose live in the heart of the lake.

In the eyes of Tibetans, Yamdrok Lake is regarded as the "scattered turquoise ear drop of the Goddess", and is a lake with two long arms of water, making it look like a  coiling scorpion from the sky. Owing to this shape, no matter where you are, you can not see the whole picture of Yamdrok Lake.

Yamdrok Lake is the largest inland lake in the northern foot of the Himalaya Range. And as a quake lake, Yamdrok was formed by rivers being blocked by glacial debris flow about hundred million years ago. The shape of the lake is very irregular, it has many bifurcations, also lots of twists and turns on the lake bank. 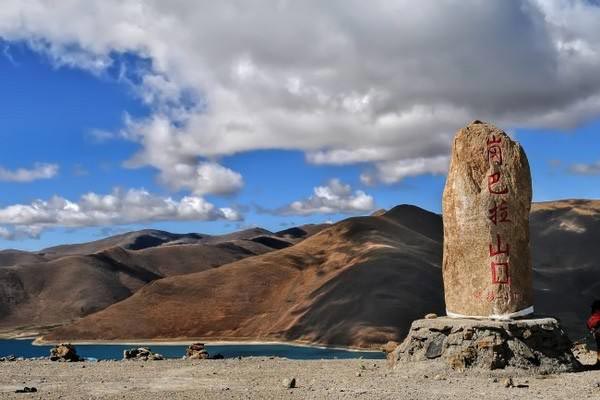 Yamdrok Lake also has other 3 small lakes. They are like four sisters, formed the Yamdrok together. The lake winders in the mountains. Even when we stand by the lake, we only can see a part of it. But if you see it on the map or look down from above like a bird-eye view, you would be surprised to find her just look like an ear drop, and the mountains look like the ear that wearing an ear drop. At different moments of time, the lake shows different kind of blue like deep blue, light blue, turquoise blue, sky blue or cerulean, just too glorious to be true.

Yamdrok Lake used to be an outflow lake in history, the lake water flowed into the Yarlung Zangbo River. But the rivers had run dry and finally it became a big lake with several small lakes. The height difference of the lake was less than 6.5 meters. 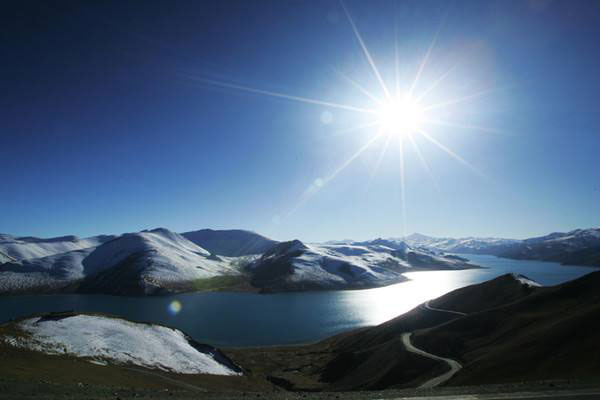 Mount Nyechen Khangsar is located in the west of the lake, of which the peak is 7206 meters high. It is the most important sacred mountain in the post Tibet area, and also one of the four sacred mountains in Tibet. Nyechen Khangsar means "Yaksha lives on noble Snow Mountain". Also the famous Karola Glacier is at the southern foot of it.

At the end of spring and early summer every year, the herdsmen transported cattle and sheep to the islands in the lake for them to enjoy the rich pasture leisurely. Enough rainfall and sunshine guaranteed the good grassland here for the cattle and sheep to graze on. The herdsmen bring their livestock returned to the shore in early winter.