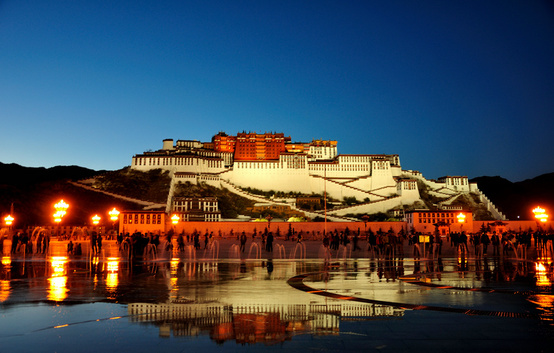 Potala Palace was the chief residence of the Dalai Lama until the 14th Dalai Lama fled to India during the 1959 Tibetan uprising. It is now a museum and UNESCO World Heritage Site.

Located in the center of Lhasa city, Potala Palace is originally built for Princess Wencheng of the Tang Dynasty who married into Tibet by Tibetan King Songtsen Gampo in the seventh century, becoming the landmark and also the symbol of Tibet years later.

The site on which the Potala Palace rises is built over a palace erected by Songtsän Gampo on the Red Hill. The Potala contains two chapels on its the northwest corner that conserve parts of the original building. One is the Phakpa Lhakhang, the other the Chogyel Drupuk, a recessed cavern identified as Songtsän Gampo's meditation cave.

The White Palace or Potrang Karpo is the part of the Potala Palace that makes up the living quarters of the Dalai Lama. The first White Palace was built during the lifetime of the Fifth Dalai Lama and he and his government moved into it in 1649.

The Red Palace or Potrang Marpo is part of the Potala palace that is completely devoted to religious study and Buddhist prayer. It consists of a complicated layout of many different halls, chapels and libraries on many different levels with a complex array of smaller galleries and winding passages.

It is a palace consisted of 999 houses on the Red Hill by the side of Lhasa River at the elevation of more than 3700 meters. This hillside palace occupies 410000 square meters with a construction area of 130000 square meters. The 13-storey main buildings of Potala Palace are extended to the present size-117 meters in height and 360 meters in width, all of stone and wood structure, five of which covered with gilded copper tile, bright with gold and magnificent. Potala Palace, famous for its complicated but spectacular architecture and glory history, is the essence of the ancient Tibetan architectural art, enjoying the reputation of “Holy Temple of the plateau”.

Potala Palace can be divided to two main parts: the White Palace around and the Red Palace in the center. The White Palace which is the Winter Palace of Dalai Lama serves as the living quarters of the Dalai Lama and was where former offices of the local government of Tibet located, comprising halls, temples and courtyards. There are seven layers in the White Palace, and the Dongyoujiyuanman Hall on the middle of the 4th floor, with an area of 717 square meters, containing 34 columns in it, is the largest hall in Polata Palace, and the body palace at the same time. It is the hall for holding the enthronement of Dalai Lama, leading ceremony and other religious and political activities. The fifth and sixth layers are mainly office rooms and living rooms. The top layer of the White Palace has two sets of Dalai Lama’s bedroom in winter. The bedrooms are called the east Sunshine Hall and west Sunshine Hall on account of sunshine all day long in the halls.

The Red Palace mainly included the Dalai Lamas’ Stupa Halls and various scripture and Buddha halls, is at the center of the Potala Palace, designed in mandala layout, with red walls outside. The Palace possesses 8 stupa halls in total which are used to contain the bodies of Dalai Lamas, among which, the fifth Dalai Lama’s Stupa Hall is the largest. Xiyoujiyuanman Hall, the memorial hall of the fifth Dalai Lama’s Stupa Hall, is the largest hall of Potala Palace, with an area of 725 square meters and supported by 44 columns. On its west set throne of Lama, hanging a plaque inscribed by Qiang Long Emperor upon the throne. Murals painted all around the hall, covering 280 square meters, among which the mural that paints the fifth Dalai Lama meeting the Shunzhi Emperor of the Qing Dynasty is an extremely precious work of art and historical data. Dharmaraja Hall and Matha Kuar Temple, together with some other buildings are said to be the earliest buildings remained from Tubo Period. There are very rare statues of King Songtsen Gampo, Princess Wencheng and Chizun, etc. Shushengsanjie Hall, the highest hall, enshrines the portrait of Qiang Long Emperor and 11-faces statue of the mercy goddess built by the 13th Lama. The thirteenth Dalai Lama’s Stupa Hall is the latest building built start in the year 1933 and completed in 1936. In addition, there are many other halls in the Red Palace such as Shangshi Hall, Putidaocidi Hall, Xiangtong Hall and Shixi Hall, etc.

Apart from the main two palaces-the White Palace and the Red Palace, Potala Palace also contains many other constructions including the school of Buddhist Logic, the Seminary, the printing house, gardens, courtyards and even the Jali.

For more than 1300 years, Potala Palace collected and preserved extremely abundant historical relics extensively, including over 2500 square meters’ murals, nearly one thousand stupas, tens of thousands of statues and Thangka (scroll paintings), together with some valuable scripture collections like pattra-leaf scripture and gangyur scripture, and a large number of gold and silver products, porcelain, enamel, jade, brocade products and crafts.

Today, tourists can appreciate the uniqueness of Potala Palace, whether from its stone-wood staggered construction style or the cultural connotation contained in itself. It always seems to leave a deep impression on whoever has been here. Murals of the hall also are considered unique scenery in Potala Palace. On this giant painting art gallery, not only history of Tibetan Buddhism’s development is recorded but also the life of the 5th Dalai Lama and the process to Tibet of Princess Wencheng as well as ancient Tibetan architectural images and many stupas of Buddha’s warrior attendant. It can never be too much to call it a precious historical scroll painting. Meanwhile, it is scared since every time we mentioned it will naturally remind us of Tibet. In the hearts of people, this ancient architecture group which condensed the wisdom of Tibetan laboring people and also witnessed the cultural exchange between Han and Tibetan nationality has become the symbol of Tibetan people with its majestic appearance and holy status of Tibetan Buddhism holy land.