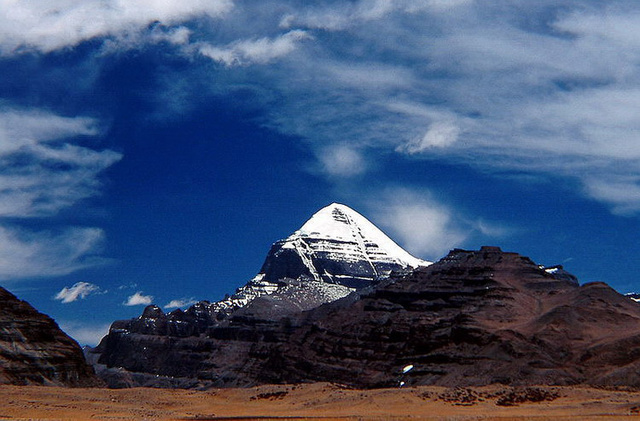 The peak is very pointed and looks like a pyramid piercing the sky. Seen from the south the vertical ice trough and horizontal rock formation combine as the Buddhist symbol Swastika '卐', which represents the eternal power of Buddha. More often that not, clouds will gather above the peak, so clear days are thought to be a blessing because local residents can get an unimpeded view.
It is considered a sacred place in four religions: Bön, Buddhism, Hinduism and Jainism. The mountain lies near Lake Manasarovar and Lake Rakshastal in Tibet.Their spiritual aura and paradisiacal scenery also entice ordinary tourists.
Kailash means 'Treasure or Saint of Snow Mountain' in Tibetan. The name originates from the year-round snow on its peak and its historical religious connections. The mountain is sometimes called 'Mother of Iceberg'. It appears to be gazing at another mountain, Namcha Barwa, or 'Father of Iceberg' in the far distance.
Walking around the mountain is a popular ceremony despite the length and difficult terrain. According to the sayings of Buddhism, one circle around the mountain can atone for all the sins committed throughout one's lifetime. Completing ten circles around the mountain will prevent eternal damnation of hell tribulation in one's reincarnations of 500 years. Completing one hundred circles will make a person one with Buddha. While walking, Buddhists follow clockwise while Bonists proceed in a counter-clockwise direction. In the horse year when Sakyamuni, the founder of Buddhism, is said to be born, worshippers get credit for thirteen circles for every one completed. Naturally, these years draw the largest number of tourists.
Special Features
The mystery of Mt. Kailash lies in that for somewhat unknown reasons, the snows on the southern slope of the mountain never melt all year round, covered with a thick layer of ice; and on the northern slope of the mountain, there’s seldom any snow there and even though covered by a little snow, it would be melted as soon as the sun rises up, which exactly runs counter to the nature’s routine. The lofty upright Mt. Kailash is not only steep but also solemn and quiet, surrounded by numerous wonderful rocks, canyons, shrubs and clear springs and streams. Usually, the top of the mountain is in the clouds and difficult for tourists to see its whole real portrait. Hence, local people in the vicinity of Kailash regard seeing the peak of the mountain as a very lucky matter.

In addition, the Mt. Kailash has always enjoyed the reputation of “the top of Ali Regions”, stands in the Ngari Prefecture of Tibet and stretches to the border of China, India and Nepal. Mt. Kailash is universally accepted to be the holy mountain and meanwhile, it is regarded as the center of the world by Hinduism, Tibetan Buddhism, Bon and Jainism. Furthermore, Shiva, the god that possessed the maximum mana and enjoyed the highest position of the three Great Gods is said to live here and both the Indus River and the upper reaches of the Ganges River are originated from here. Therefore, apart from local Tibetans, a large number of pilgrims from India can be seen here in Mt. Kailash. For centuries, Mt. Kailash has always been the dream place in the minds of the pilgrims and explorers, however, no one has climbed to the summit or said in this way that no one dares to offend the center of the world.

After reached in Ali area, it is suggested to have a look at the four great rivers there flowed from the Mt. Kailash in four directions including Maquan River, Shiquan River, Xiangquan River and Kongqi River. Meanwhile, different religions deem that the mountain is to some extent related with their own gods. For example, Mt. Kailash is the “Sumeru Mountain” composed of gold, silver, glaze, and glass, surrounded by the Seven Kingsoft, Seven Heung Hoi and twelve Deltas, which symbolized the center of the whole universe of Buddhism. In the Tibetan Bon religion, it is where three hundred and sixty deities live. Furthermore, it is also the heaven of Shiva in the beliefs of the Hinduism. A variety of denominations invariably take Mt. Kailash as the world center, hence there are numerous believers come to worship here every year. Particularly, religious believers of India, Nepal and Sikkim from thousands of miles away would experience a lot of hardship came here, kowtow to pray along the way and only considered successful after praying around the mountain, and this is especially prosperous in the year of the horse. The sites left around the Mt. Kailash are countless and the district composed of two mountains – Mt. Kailash and Naimona’nyi and two lakes – Lake Manasarovar and Lake Rahshastal is reputed as “holy mountain and lake” by the Tibetan people.

As one of the most challenging trekking route in the world, Mt. Kailash Kora is the best way to worship this holy mountain and realize your lifetime trip of thoroughly meditation. The whole circle route is about 52km. For some Tibetans, the Kailash Kora trekking will only cost them 15 hours while for most tourists, they may need 2 nights and 3days on foot to finish the trek. However, your journey will be very enjoyable because of the appropriate arrangement made by our well-experienced tour guides.