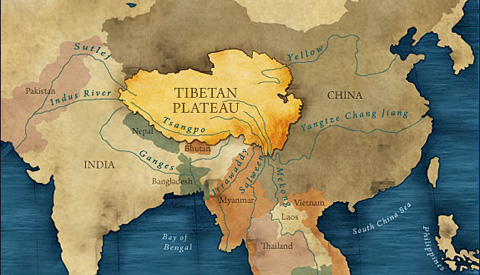 Located in the southwest frontier of the People's Republic of China, Tibet Autonomous Region has an area of over 1.2 million square kilometers, which makes up one-eighth of the total national area, only second to Xinjiang Uygur Autonomous Region. With the average elevation of over 4,000 meters, Tibet is the plateau region with the largest space and the highest sea level in the world, which is dubbed "the World Ridge" and "the Third Pole on the Globe". Tibet is contiguous to Xinjiang Uygur autonomous Region and Qinghai Province by the Kunlun and the Tanggula Mountains on the north, looks at Sichuan Province across the Jinsha River on the east, is connected with Yunnan Province on the southeast, borders Myanmar, India, Bhutan, Sikkim, Nepal and Kashmir. With nearly 4,000 kilometers land boundary line, it is China's southwest barrier.

Geographically, Tibet can be divided into three major parts, the east, north and south. The eastern part is forest region, occupying approximately one-fourth of the land. Virgin forests run the entire breadth and length of this part of Tibet. The northern part is open grassland, where nomads and yak and sheep dwell here. This part occupies approximately half of Tibet. The southern and central part is agricultural region, occupying about one-fourth of Tibet's land area.

With all major Tibetan cities and towns such as Lhasa, Shigatse, Gyantse and Tsedang located in this area, it is considered the cultural center of Tibet. The total area of the Tibet Autonomous Region is 1,200,000 square kilometers and its population is 1,890,000. The region is administratively divided into one municipality and six prefectures. The municipality is Lhasa, while the six prefectures are Shigatse, Ngari, Shannan, Chamdo, Nagchu and Nyingchi.

Vegetation on Tibetan Plateau
From southeast to northwest of Tibet, montane forests, alpine meadows, alpine grasslands or steppes, semi-deserts or alpine deserts are distributed with a clear pattern of zonation, which is quite different from other parts of inland China, or the neighboring countries. This article is an introduction to vegetation in Tibet.

Animals on Tibetan Plateau
In this article, we’ll introduce five mammals and one bird species who play the role of flagship species on Tibetan Plateau. And through the protection of them, the other species sharing the same habitat are benefiting as well.

Mountains on Tibetan Plateau
Home to the highest mountains and peaks in the world, Tibet got the name “the roof of the world”. There are 44 mountains in Tibet including Mount Everest and Mount Kailash. Many of these mountains are worshipped as holy land of gods or goddesses. Their existence provides spiritual support to Tibetans.

Lakes in Central Tibet (Tibet Autonomous Region)
Tibet is a land with thousands of beautiful lakes. The three holy lakes in Tibet are Yamdrok Lake, Namtso Lake, and Manasarovar Lake.