It is understood that Hefei-Lhasa direct flights are operated by West Air and are scheduled daily, and the duration of the flight time is about 3.5 hours. The flight would return to Lhasa from Hefei on the same day. 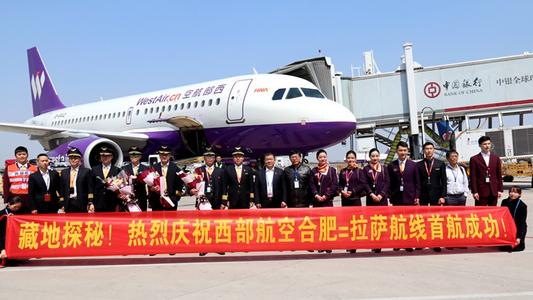 Silang Zepei, deputy director of the Tibetan Regional Bureau of Civil Aviation, said that this route is the first direct route connecting Anhui and Tibet, indicating a new fruitful result of Anhui's aid to Tibet and a new step in economic, tourism and cultural cooperation between Anhui and Tibet.

In the planning of counterpart aid to Tibet, the Anhui Provincial Aid has adopted the principles of inclining to the grass-roots rural and livelihood of famers and herdsmen so as to make full use of the aid projects. The projects mainly focus on the construction of livelihood, especially on education and health assistance to Tibet.

Up to now, the 13th Five-Year Plan of Anhui Province has reached a preliminary plan of nearly 700 million yuan and about 40 Tibet-aid projects.

Related articles
Modern themes Thangka completed The paintings are creations of folk artists to use the traditional artistic technique to express modern themes.
Lhalu Wetland in Tibet Lhalu wetland is known as the "the lung of Lhasa".
The 1st Artificial Wetland Project launched in Tibet Two artificial wetlands about to launch in Tibet.
Shangri La Hotel opens in Lhasa The opening of the Shangri-La Hotel in Lhasa makes it the first luxury property of the hotel group in the Qinghai-Tibet plateau.
Road suspended by landslide reopens in Tibet Landslide reopens in Tibet on July 2nd.
Nuns in Qingpu Hermitage Lying 4,300 meters above the sea level, the temple is considered a holy land for penance in Tibet.