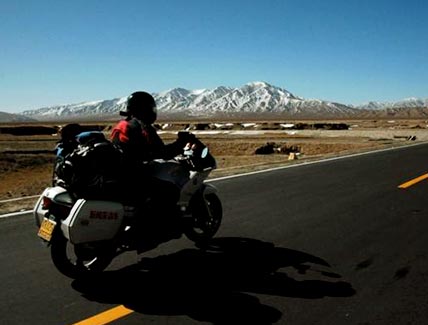 Upon your arrival in Xining, our guide will meet you at the airport or train station, then transfer you to the hotel for a short break. You may rest or explore freely in the city for the rest of the day. Xining is also called “summer resort of China”, the altitude in Xining is about 2260m, make sure to take enough rest so that to get used to the altitude ASAP. Stay overnight in Xining.

Today we will pay a visit to Ta’er Monastery. It is the most important Monastery in Xi’ning, named from the Great Temple of Golden Tile, one dedicated to Zongkaba. The temple is actually comprised of several temples, halls for scripture, Buddhist pagodas and monks' dormitory, and incorporates both Tibetan and Han architectural styles. Later driving to Qinghai Lake by crossing Sun & Moon Mountain (With an altitude of 3520 meters, it is the exact route taken by Princess Wencheng and Songtsen Gampo in Tang dynasty when they married , since when numerous passersby would go there and trace the way.). Qinghai Lake means “Blue sea” in Chinese, and the biggest inland saltwater lake. The vast beautiful lake surrounded by snow-capped mountains and nature pasture, the grazing cows and sheep crowds are like clouds moving on the green grassland. Stay overnight at Qinghai Lake.

Say goodbye to the incredibly stunning sunrise at Qinghai Lake, take last glance at the ripples stretching far across the lake,mountains in the distance, our next stop is the Chaka Salt Lake. (Noted for its natural crystal salt, the lake is extracted as far back to 1763A.D and has a history of over 230 years so far). Stay overnight at Chaka Salt Lake.

Driving to Golmud from Chaka, it is a city in the desert, that’s why its called Treasure bowl. The Gobi sight is quite visual impact, you will not forget the magnificent beauty of the oasis in the desert. The altitude at Golmud is 2780m. the name of Golmud is from Mongolia, means a place with interlace rivers. Stay overnight at Golmud.

View along the way

After Breakfast, begins our tour to the mouth of Mt Kunlun along the highest altitude road in the world. Take a drive through the vast wilderness and Tsaidam meadow on the Tibet-Qinghai-Plateau. You can also see numerous hills rising one upon another, snowy peaks towering into the sky, and a vast expanse of grassland This journey moves along the road that lies at the foot of the Kunlun Mountain. Move upwards through a steep valley to cross over the 4.837- meters-high Kunlun Pass. After that you pass by the First Bridge over the Yangtze River and finally reach Tuotuoheyan (located in head stream of Yangtze River). Stay overnight in Local Guest House.

Today we are crossing the Mt. Tangula, it is also the dividing ridge of Qinghai and Tibet. Take a look from the instance, you can find it proves itself as the mount in the plateau with icy peaks and snow ridges surrounded , the source of the first river of the Yangtze River (Tuotuo River). The environment is in harmony with local animals like eagles, sheep, cattle and yaks along with the snow-capped mountains and tents belonging to Tibetan farmers. Stay overnight at Local Guest House.

Today, you will drive to Namtso Lake, the highest altitude holy lake in the world by crossing immense northern Tibet Qiangtang Grassland. If you are coming during summer time, you can have close contact with the Tibetan Nomad like visiting their tents and sharing fresh yak milk, the changeable plateau climate would give you the real feeling of reaching to the Third pole of the world. (Notice, the nomad visit is only available at summer time from June to August). Namtso Lake is the Heavenly Lake which is one of the three holy lakes of Tibet and also the highest salt lake, where blue water and sky blend into one harmonious whole, do a relax trek around the lake side and Tashi Island. Stay overnight at Lake Shore Guest House, dorm bed.

Get up early, enjoy the clear morning and do not miss the sunrise at Namtso Lake. Farewell to the Odd-shaped rocks in Tashi Island, southern lake, and meditation caves with numerous legends. We are driving to Dumxung to have lunch. In the afternoon, you will visit Yangpachen hot spring which is noted for its highest geothermal power plant in the world on the way back to Lhasa [optional]. Stay overnight in Lhasa.

Potala Palace, considered as the pearl of world roof, is the landmark of Lhasa and is also considered one of the Seven Wonders of the World. In November 2000,the UNESCO put the Potala Palace architecture group into the world heritage list. In the afternoon, tourists will visit Johkang Temple, built during songtsen Gonpo's reign by princess wencheng of tang dynasty. The highlight in Jokhang is the sacred goat head in the Jampa chapel which is believed to be 'self-arisen' i.e. not manmade. And finish the day by taking a Kora around the Barkhor Street. Test your bartering skills with the locals in this push-and-shove economy. Stay overnight in Lhasa.

Drepung monastery is situated at the foothill of a mountain and was founded by Jamyang Choeje in 1416. The Monastery is about 8km west of central Lhasa. It was once home of 10000 monks and Ganden podrang in Drepung is famous as it was the government centre during fifth Dalai Lama and later moved to the famous potala palace during fifth Dalai Lama. Enjoy the walk up the hill, you can have a great view of the whole Lhasa city.

Then visit the Nechung monastery located 1km southeast of Drepung and is the abode of the protector deity pehar and the seat of the state Oracle of Tibet. In the afternoon explore the Sera monastery which was founded in 1419 by Tsongkapa's disciple Jamchen Choeje. It is another great Gelupa Monastery in Lhasa city. Here you could see the famous “ Buddhism Scriptures Debating” in the afternoon. Stay overnight in Lhasa.

Day 11 Leave Lhasa for your next destination

If you are not visiting other parts of Tibet like Shigtse, Tsedang, and Everest Base Camp etc. Then it is time to shop some souvenirs for your families and friends, say goodbye to the friendly Tibetans with their prayer wheels in hands. We will drop you to the airport or train station for your next destination. But if you want to other parts of Tibet, please feel free to let us know. we have lots of choices that can take you to see different and more about Tibet.

What’s included in this tour package?
Government paper works: tourism bureau, transportation, police, custom, etc.
The temporal driving license and driving plate of the car in China (We only provide one free temporal driving license, and there will be $75 / person fee for extra driving license.)
Twin-sharing / double room hotel in cities; guesthouse at remote areas
Good English-speaking guide
All entrance fees of sightseeing places mentioned in itinerary except the optionals
Vehicle Insurance of the accident
All necessary travel permits
Government tax

It’s easy to find nice restaurants in China, and you could also ask for suggestions from your guide. They always know where you can find something tasty.

Tibet lies in the north-east of the Himalayas. It is special not only for the spectacular nature scenery, also the unique local customs. For a lot of people, Tibet is remote and inaccessible. But once you are here, you would know it’s a magical place, it is alien to common experiences. The beauty of Tibet is impossible to describe in words. Stop trying to define it, come and immerse yourself in it.

I highly recommend this agency. I travelled with other 2 couples who booked through different agencies and they paid a lot more to have less assistance, same hotels/tour/guide/car, less flexibility and no travel insurance included.